Malvern, Pa. (July 16, 2013) – Acrometis’ analysis of 80,000 medical bills occurring during the first week of a work injury showed that the highest costs were in the M.D. and orthopedic surgeon categories.  Yet while these two categories represented the largest expense, they yielded the lowest percentage of savings. 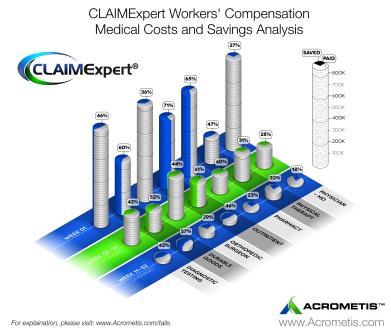 Acrometis’ analysis, captured in the third edition of its Strength in Numbers series, identified the top seven medical spend categories in 80,000 bills from 3,955 lost-time and medical-only claims processed through its CLAIMExpert processing platform. Acrometis examined provider type, type of treatment, date of treatment, and the percentage of savings payers received on those bills. In descending order, the top spends were M.D., orthopedic surgeons, pharmacy, diagnostic testing, durable medical goods, and physical therapy.

Following the spend and savings in the seven categories for the first 52 weeks of the claim, Acrometis found that percentage of savings in the M.D. category continued to be the lowest of all seven categories.  “If payers had the week-one savings data, they could have negotiated better network contracts or contracted with providers offering more attractive fee pricing,” Kilroy added. “Identifying areas of costs and savings early in the claim enables payers to reduce the overall cost of the claim.”

The Acrometis Strength in Numbers report is available at http://www.acrometis.com/tails.

Acrometis offers the most complete and automated claim processing platform designed specifically for the workers’ compensation industry. Acrometis’ CLAIMExpert® is a rules- based claim processing platform that deterministically routes claims documents and bills, allowing for meaningful changes to the claims processing environment that in turn leads to maximized cost savings, efficiency, and productivity gains over the lifecycle of a claim. For more information about Acrometis and the CLAIMExpert platform, please visit www.acrometis.com.

Get notified by email when new posts are made.